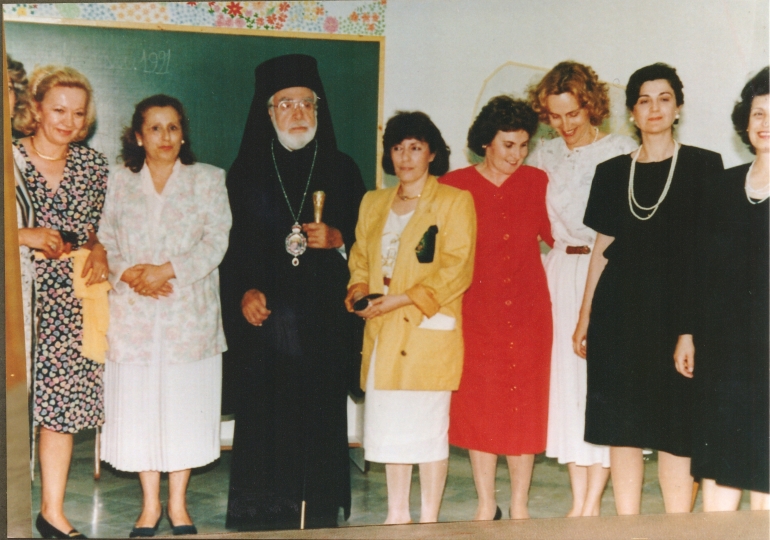 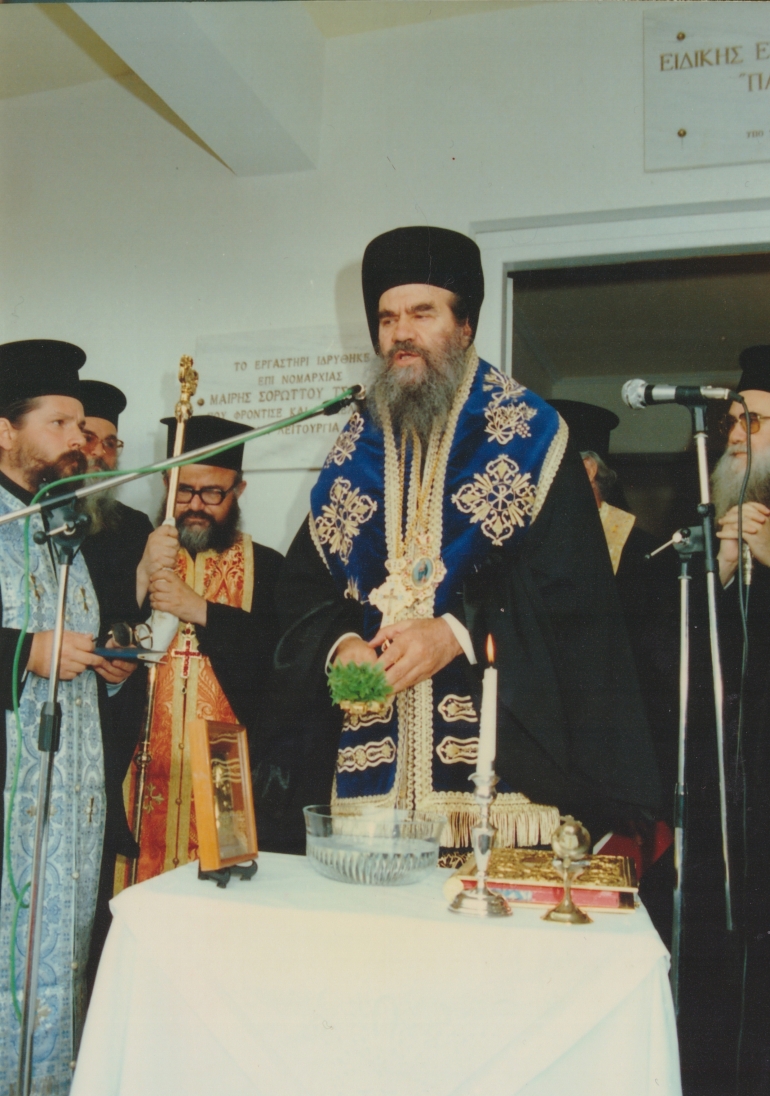 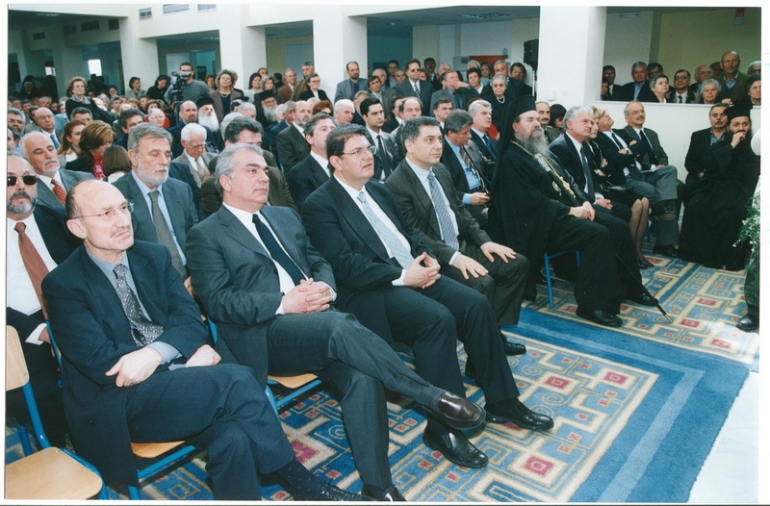 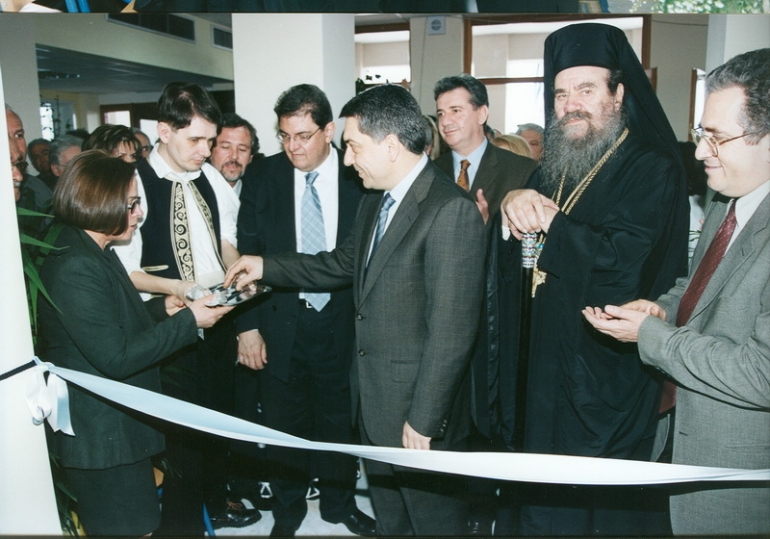 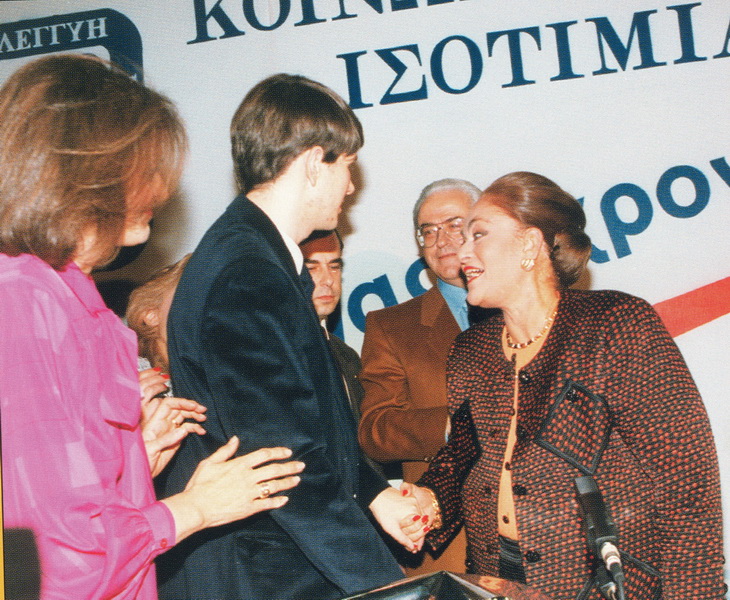 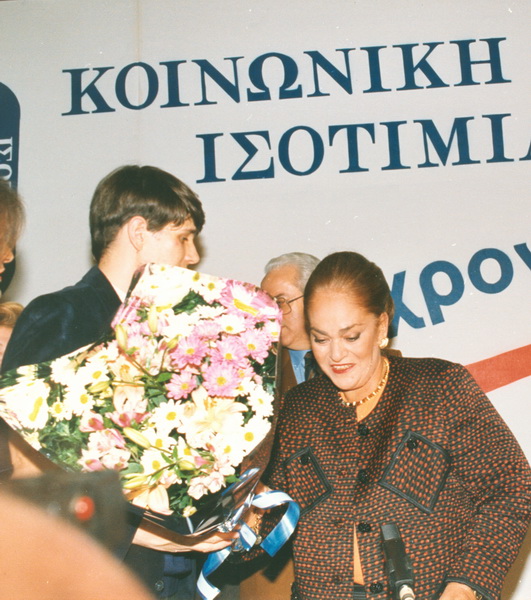 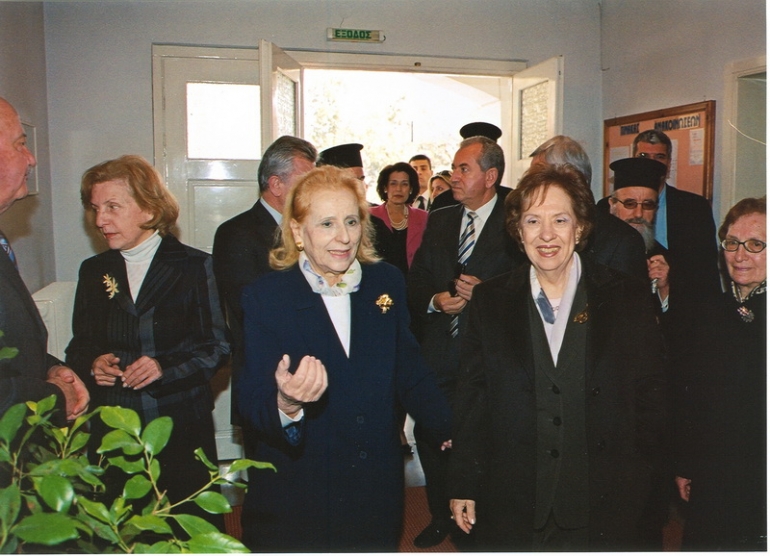 The Workshop “PANAGIA ELEOUSA” was founded and operated in 1990 by Mrs. Maria Tsoutsou, mother of the late George, son of Alexios Tsoutsos, a boy with intellectual disability and also with the help of partners and distinguished citizens of Messolonghi and Agrinio cities.

For the creation of the Workshop "PANAGIA ELEOUSA", under the initiative of Mrs. Maria Tsoutsou, in June 1989, a meeting took place in Agrinio at Mr. Dinos and Mrs. Vivia Farmaki ‘s home, having already gotten the support of her entire family for establishing the Association, which would provide education, training, lifelong care, a program of daily quality services and in the future (operation of residential facilities, culture, environment etc) to people with intellectual and related disabilities, kinetic disabilities, sensory impairments, speech disorders, slight psychiatric disorders, autism, Down Syndrome etc. People with intellectual disabilities would be trained in many training departments such as: sewing, silk-screen printing, ceroplastics, floriculture, folk art, weaving, ceramics, pastry and bakery, bookbinding, office tasks, information technology, environmental training etc.    Then meetings followed with concerned citizens from Agrinio and Messolonghi cities, who were the founding members and afterwards they became members of the Board of Directors and the Auditing Committee.

First milestone in our course
On May 14th, in 1990 with the No. .... decision of the District Court of Messolonghi city the Workshop of Special Vocational Education and Rehabilitation "PANAGIA ELEOUSA" officially takes the title and then with the no. 648/12 -10- 1990 FEK, is characterised as  a specifically recognized Charitable Society, a Private Law Legal Entity, of non profitable nature, of social interest.

The Workshop “PANAGIA ELEOUSA" is governed by a seven-member Board of Directors and a three-member Audit Committee, of which all members have been volunteers for 27 years and they are not paid.
The first Board of Directors was comprised of:
Maria Tsoutsou, President
Popi Datseri, Vice-President
Popi Rompola, Secretary
Erifilli Papatheou, Treasurer
Paulina Soumeli, Member
Christina Filou, Member
Maria Chronopoulou, Member

The operation of the Workshop "PANAGIA ELEOUSA" began in an unfinished property, a donation of the Metropolis of Etolia and Akarnania, of a surface about 1,000 sq.m. in Messologhi city, donated by the Bishop of that time, His Beatitude Theoklitos to the young people with special needs, which was gradually completed thanks to the donations of citizens and with the funding from the Ministry of Health and Welfare and the EU through the HORIZON program. The ground floor at the beginning housed 24 young service users, although there were many more, because of the resistance of the parents, as it was difficult to take their children out from their home, being afraid of the disclosure of the problem and the stigma. With the financial assistance of the Prefecture of Etoloakarnania, began the operation of the Workshop "PANAGIA ELEOUSA" and gradually until 1994 we completed the building and we equipped our facilities by operating training workshops and a small boarding house for children lacking parental care. Until 1990 there was no social welfare structure in the prefecture of Etoloakarnania to cover the needs of such a sensitive social group, who are the people with intellectul and related disabilities, over 15 years old, after their graduation from the Special Primary School and to relieve their families.  The original vision of the founder Mrs. Maria Tsoutsou was: to give education, light, hope, smile to children with intellectual disability, to get themselves and their families from the state of being stigmatized to being equal and having equal rights with the other citizens according to our country s constitution and the Charter of the European Union and as it is dictated by the anthropocentric character of Greek culture and the Christian humanism. Mrs. Maria Tsoutsou made an innovative action in the perfecture of Etoloakarnania, an indigenous work, deeply human, useful to our society and our prefecture, in an era of exclusion for the people with intellectual disabilities and their families. Our work gave hope and a breath of life to the parents bearing the stigma for their forgotten special children. We strove hard, we opened new roads for equal opportunities to integrate our children with the wounded intelligence in education, life, culture. We strove for their right to be respected and for their human dignity. We also worked with passion and dedication to raise the public awareness with Seminars, Conferences and Speeches in which famous personalities of the country and citizens of the local community participated. In this way, we created a sufficiently favorable social environment, characterized by social acceptance with prospects of equal social integration for the people with intellectual disabilities. Consequently, we believe that we contributed to the rise of the cultural indicator of our prefecture.

We believe that the work of the Workshop is the outcome of the work of many people, which should be preserved (as an ark) and be established as one of the best education, social rehabilitation centers providing quality services to people with intellectual and related disabilities.

The Workshop is an indicator of sensitivity and culture for our region.  It has a solid foundation.

That is to say, Mrs. Maria Tsoutsou made a peaceful revolution in the sector of the social welfare state. The fact that her son George Tsoutsos was born with intellectual disability and he came from a family of doctors contributed to the fact that more and more parents trusted us.

The number of our trainees got bigger, there was a waiting list of many people from the wider region of Agrinio which due to the distances we could not cover and we foresaw that in the near future we would face a capacity problem.

Second milestone in our course
In 1995 Mrs. Christina Filou, a member of the Board of Directors, donated to the Workshop a stretch of land of about 7.5 acres in the area of  Psilogefyro, in Agrinio. In this stretch of land in 1998 the procedures started for the construction of facilities of 2,000 square metres, integrating this work in PDE with the support of the Ministry of Health and Social Solidarity and with the technological support of scientists, volunteer citizens of the area who prepared the architectural-static-engineering designs, as well as with the help and the great support of the Prefecture of the technical services of the prefecture of Etoloakarnania and the Ministry of Health and Welfare with the excellent Director of that time, Mr. Leonidas Thomakos who all together became volunteers to this great social effort.   Mrs. Maria Tsoutsou, Founder and Honorary President in her farewell speech on February 16th, in 2014 during the General Assembly of the Association she mentioned the following:
"... The Workshop is an indicator of sensitivity, welfare, solidarity and culture of this region. It has a solid foundation, a Board of Directors composed of distinguished and great women and an Audit Committee who with great zeal and interest work for its progress and evolution, capable and dedicated employees, whom I thank warmly from my heart. Also the Association consists of fine members and two wonderful local communities with strong people who support it.  I believe that the bridge of love, cooperation, volunteerism and solidarity between Messolonghi, Agrinio and Aitoliko created for the benefit of people with the wounded intelligence and the progress of the country will be maintained and increased. I, Maria Tsoutsou, feel in a humble way, immense gratitude to all of you, who were the pillars of this Work. I thank from my heart and soul all the members of our Association. All together with genuine love and precious materials, warps and wefts, we wove day after day for many years the social work of the Workshop "PANAGIA ELEOUSA".
In addition, I am grateful to our Bishop, the Very Reverend, Mr. Kosmas for his father love, for the genuine interest for our young people, who also bears the title of the Honorary President of the Workshop ..."

Milestones in our course
In 1991, the Cultural Club-Counselling Centre operated in Agrinio, in order to make the best use of the trainees’ leisure time but also for their counseling support and for their families.
In 1995 the Boarding house operated at Messolonghi, with a capacity of 10 people for trainees who lacked parental care.
In the same year the Showroom operated in Messolonghi, in which the handmade products of our trainees were made available to the general public. The rent for this showroom was covered for 15 years, by Mr. Prodromos Emfietzoglou, President of "MIHANIKIS A.E.".
In 1998 a second Showroom operated in Agrinio (9 Ch. Trikoupi Street, against Agrinio City Hall), for the same purpose, with the help of Papastratos family, in memory of Tassos Papastratos, for two years they supported it financially.
In 2001 it was founded and operated in Agrinio, the B’ Educational Centre.
In 2004 the Nautical-Environmental Center, operated in Messolonghi, in which environmental, camping and cultural activities were implemented  in a stretch of land of 16 acres, granted by the Public Real Estate Company exclusively for people with intellectual and related disabilities.
In 2004 the Association "Friends, Parents, Guardians and Volunteers" of the Workshop "PANAGIA ELEOUSA" was founded as a network of volunteers to support the work of the Workshop.
In 2008, after external evaluation the Workshop "PANAGIA ELEOUSA" obtained the certification of best practice (EQUASS EXCELLENCE) in the social services sector by the European Platform for rehabilitation (E.P.R.). This evaluation is repeated every three years.
In 2008, according to the law "On Special Education and training for people with disabilities or special educational needs" (N.3699 / 2008, Article 6. Par.4b) the Workshop "PANAGIA ELEOUSA" provides services on equal terms as the School Units of Special Education and Training (SMEAE).
In 2012, the Boarding House in Messolonghi operates, through the NSRF, as an Assisted Living Facility-SYD- a Boarding House of nine people capacity for trainees who lack parental care.
In 2013 a second Assisted Living Facility-SYD- a Boarding House was built in Agrinio at a stretch of land  of 8.5 acres donated to the Workshop by the late Aspasia Karapapa.   The Annual General Assembly of the association "PANAGIA ELEOUSA", on February the 16th, in 2014 elected as the new President Mrs. Dionysia Samanta, after the withdrawal of Mrs. Maria Tsoutsou who was President for 25 years and now bears the title of the Founder and the Honorary President.
In 2014 the Workshop "PANAGIA ELEOUSA" innovated by creating two independent  training departments for people with autism integrated in the operation of the Day Care Centres of the Workshop “PANAGIA ELEOUSA” in Agrinio and Messolonghi cities. On April the 2nd, in 2015, Mr. Nick Karapanos, Mayor of the Holy City of Messolonghi honored Mrs. Maria Tsoutsou for her social work with the Gold Medal of the City and awarded her the title of the Honorary Citizen of Messolonghi city.
In 2015 the Nautical Environmental Center in Messolonghi serves as a Day Care Centre for people with intellectual and related disabilities. In the same place operates the second department of autism. On December the 22nd, in 2015 the Workshop was awarded by the Academy of Athens with the prize of Ekaterini P. Economou, for its great social contribution. The award was received by the President of the Workshop "PANAGIA ELEOUSA" Mrs. Dionysia Samanta. 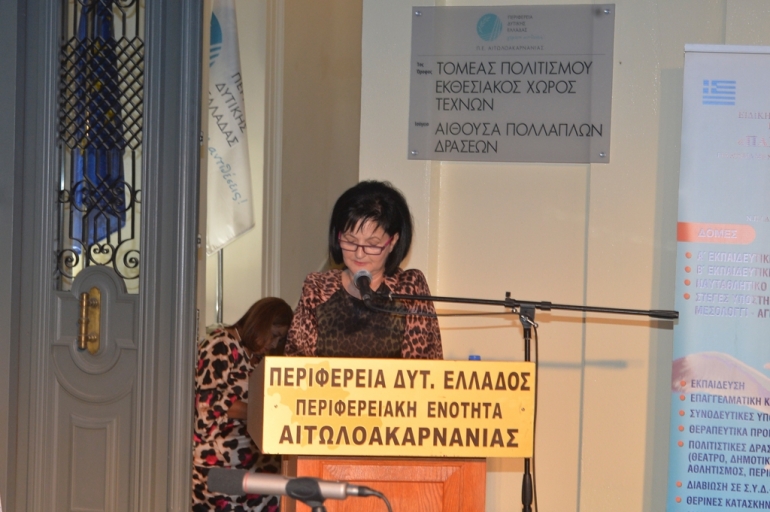 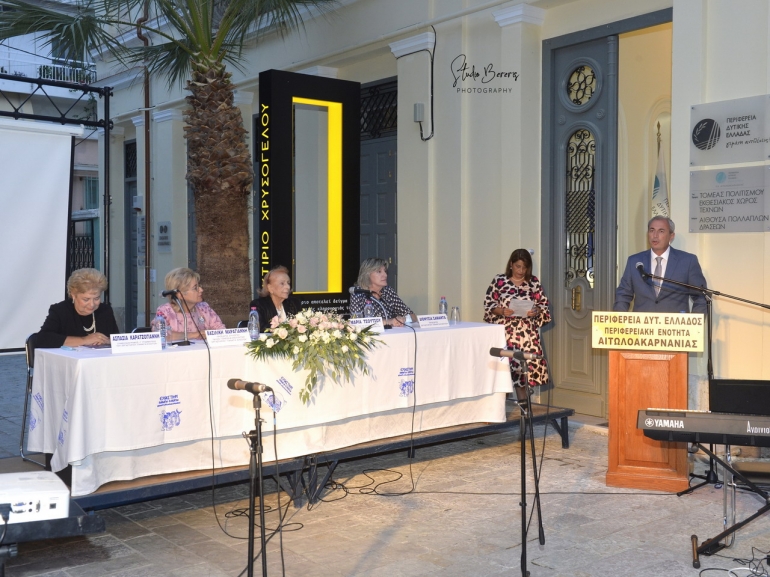 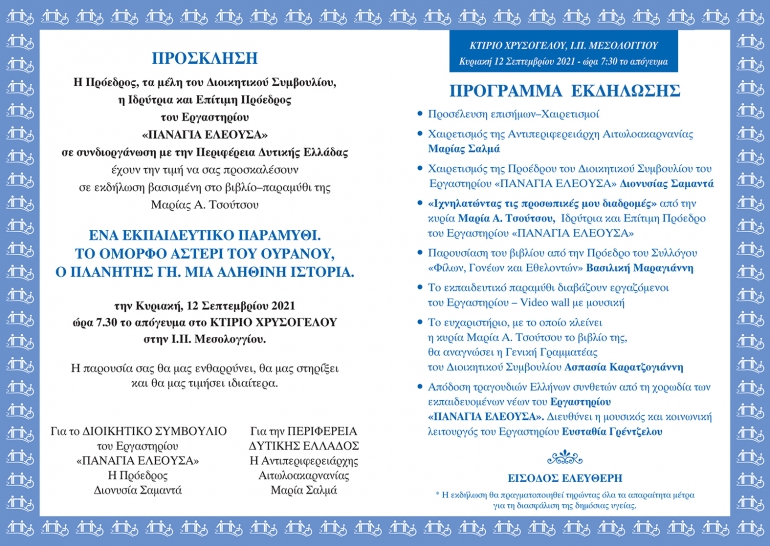 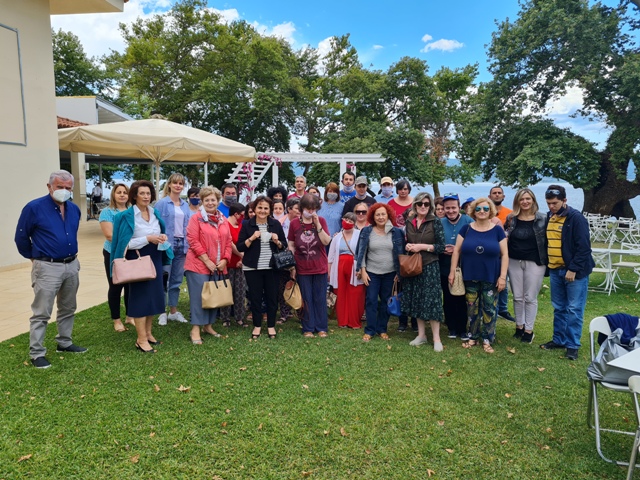 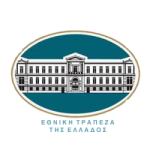